Shiny on AWS - Deploy the app on your server

This article belongs to the series How to deploy a Shiny app on AWS, divided into 7 parts. To access the other articles, use the following table of contents:

At the end of the previous article, I said you already had a Shiny app running on your server!

Find the IP address on your server

When you start a new AWS server, an IP address is automatically affected to it.

Warning: The IP address changes each time you reboot the server. If you want a fixed IP address, you’ll need to visit the Elastic IP section and allocate an address to your server. We’ll discuss that in the next article!

In your EC2 dashboard, there is a column IPv4 Public IP.

Find it and note the IP address.

And to access the Shiny app, you just need to type this address in your browser AND specify the port number: 3838.

Except… it doesn’t work. 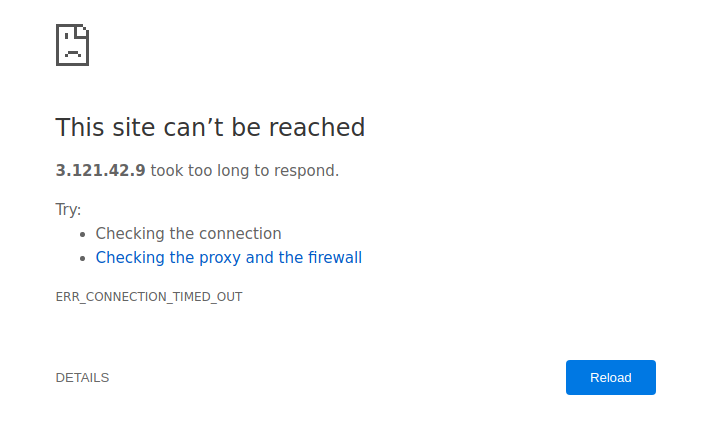 Open the port 3838 on the firewall

The reason is that for security reasons, AWS blocks all the ports except 22 by default. Port 22 is the one we used to access the server via SSH in the previous article.

To change that, from your EC2 dashboard:

Here are a couple of screenshots in case you’re lost: 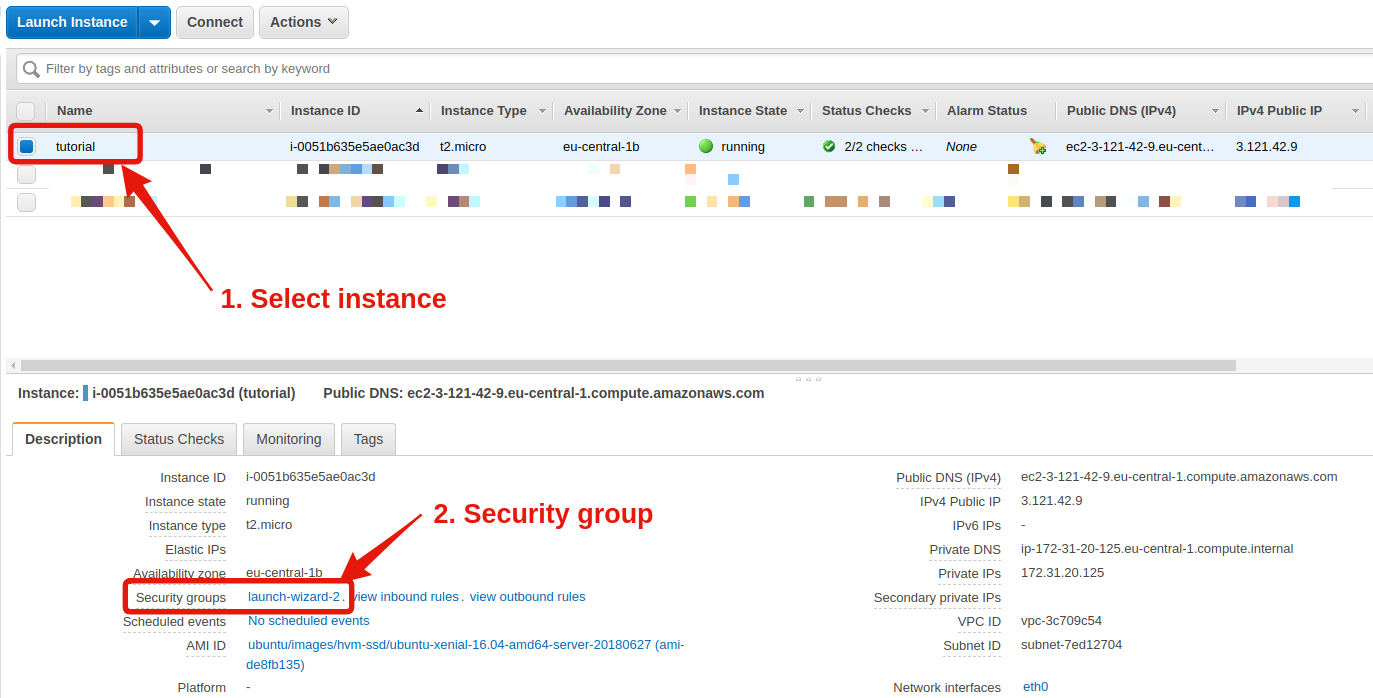 Once the port is open, the app will load! 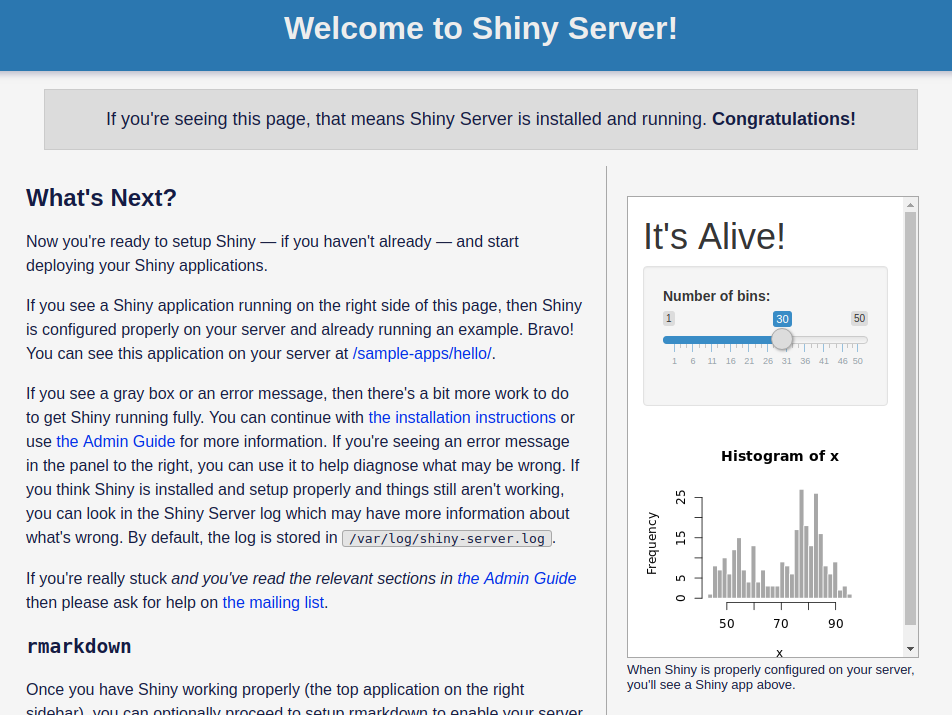 Note: The address is a bit ugly right now. You must type an IP address followed by a port number, erk. In the next article, we’ll discuss how to have a readable address and get rid of the port number.

We obtain an HTML page with a couple of Shiny widgets in the right sidebar.

You may get an error message in one of the widgets: “An error has occurred”. This is totally normal, it comes from a missing package.

2. How to deploy YOUR app on the server?

To do so, we need to get back to the console of the server.

If you forgot, get back to the previous article: Install R and R Shiny

First, let’s explore what we have.

We just noticed that when you first install Shiny Server, you get a default app.

This app must be stored on the server, right?

So where is it?

Simply, it’s in /srv/shiny-server. That’s where we will store all our apps.

Type the following in the console:

Notice there is a directory, sample-apps, and a file, index.html.

The file index.html is what you saw when you accessed the app. And it calls the app that is in sample-apps. If you dig deeper:

You find the usual server.R and ui.R, the foundations of any Shiny app!

By default, Shiny Server uses this directory to display apps. You can change it, but I don’t recommend it.

What we’ll do instead is:

First, let’s get back to the home folder:

And let’s clone the app from Github:

Github is really handy when it comes to sharing your app everywhere.

Except that, as we said before, Shiny Server expects the app to be in /srv/shiny-server/.

Create a shortcut in /srv/shiny-server/

The following commands will create the shortcut:

Now, if you display the list of files, you’ll see the shortcut along the other files:

And we can remove the other files, by the way:

We added our app in the right folder so… it should be accessible now! 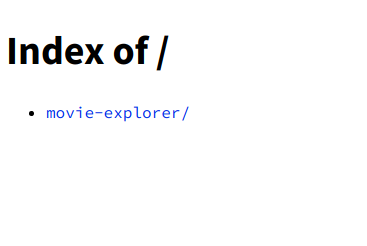 ERROR: An error has occurred. Check your logs or contact the app author for clarification.

It seems the server has indeed noticed the changes, but it doesn’t work.

3. How to configure Shiny Server?

We’ll have to change the config a little bit.

We’ll open it and try to understand what’s going on:

The file should contain the following:

Let’s tackle it line by line:

We need to make one important addition to this file. Right at the top, add:

This will enable you to keep the logs under any circumstances.

I don’t know why, but Shiny has the bad habit of deleting log files when it considers nothing important happens. But sometimes it does it even when the app crashes.

To take into account the changes, we need to reload the server:

Speaking of logs.. let’s see why our app crashes!

4. How to debug a Shiny app with the logs

The first one, named movie-explorer, is our app. The second one is from the default app.

If you don’t see any file, try to relaunch the app in your browser. That’s the issue of the disappearing log files I was mentioning before. It should be solved with the new config.

If I display the last lines of the log file, I see:

We haven’t installed the libraries!

Plus, we need to install them for the user shiny, as it’s the one running the Shiny Server.

You’ll get asked if you want to use a local library, say yes.

Once the package installed, try again launching the app.

This time, you’ll see some progress: 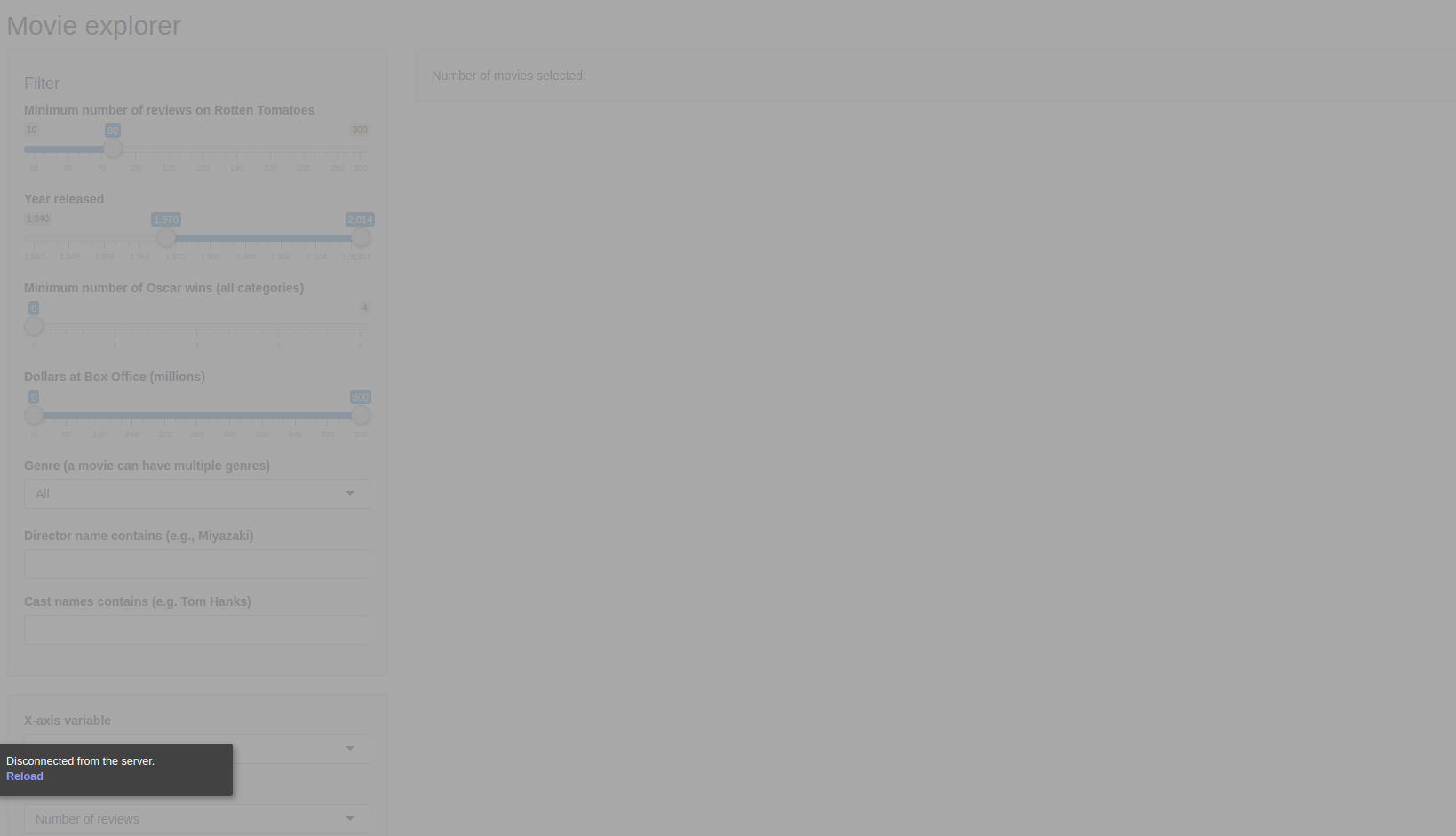 ..but then it crashed.

If you go back to the log files, you’ll notice a new file was created, and it says:

Another package is missing! dbplyr.

Note: After installing the package for the user shiny, you can go back to the main user ubuntu by typing exit in the console.

Now you know how to install the package. 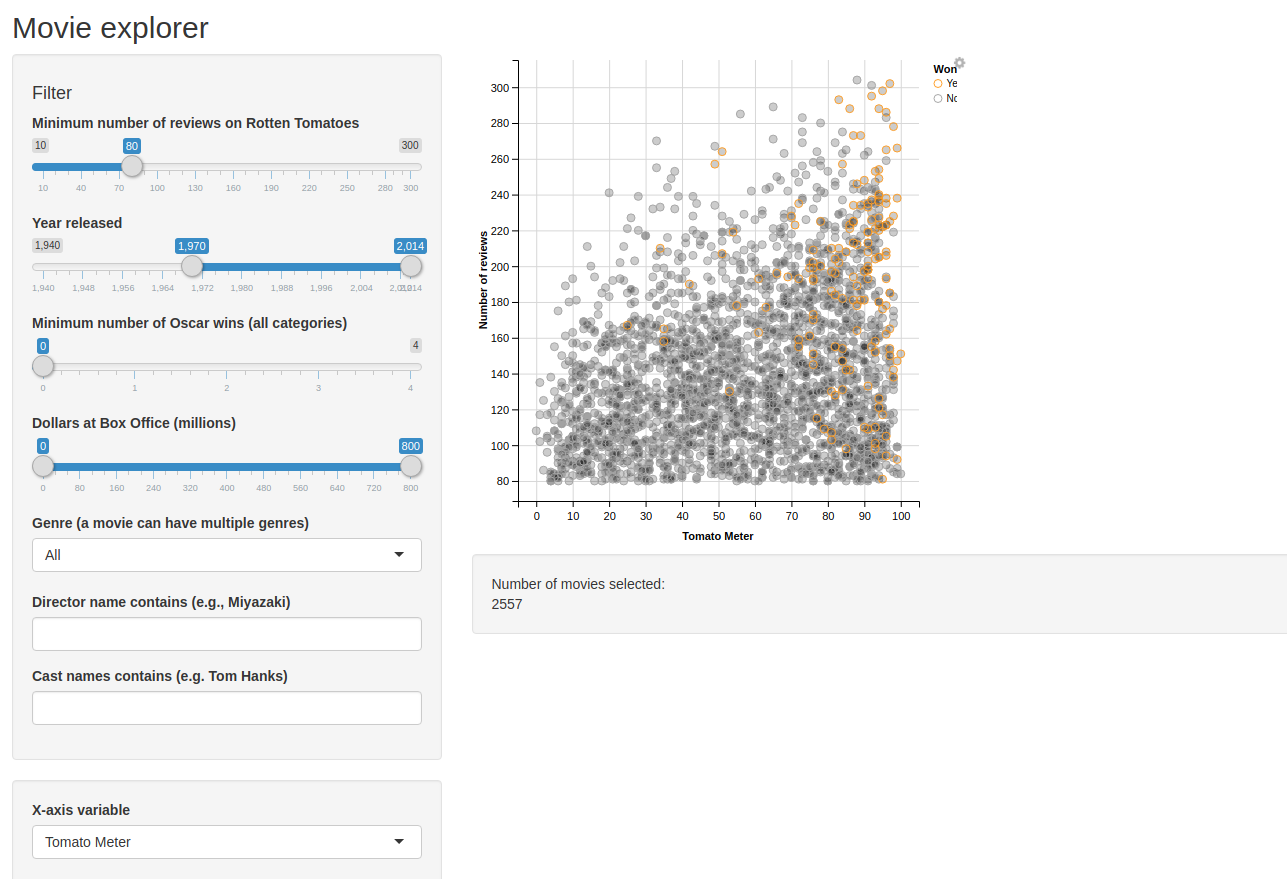 Note: By the way, if you need to install the dplyr package, you will need at least 2 GB of RAM on your server.

With AWS you can upgrade the server, install the package, and then downgrade once done.

Thank you very much for this series. I currently have issues installing dplyr because of lacking memory during compilation. The installation hangs at “compile mutate.cpp” just like in this post. Have you experienced that as well?

I’ve had this issue before, and the only way I solved it was by increasing the memory of the machine I was working on.

If you’re using an AWS server, you can increase its capacity temporarily to install the packages, and once they’re installed, you can decrease the memory again. You need the extra memory only for installation.

I eventually solved it by creating 1GB of swap space with sudo fallocate. Worked like a charm and didn’t require any changes via the AWS GUI.

That’s awesome, I hadn’t thought of that idea at all. Thanks for sharing it ;)

Hi. Thank you for the series, it has been very useful. Are you going to tackle how to optimize the app for multiple concurrent users ?

Hi Francisco! I have a couple articles to write before that, but yes eventually I want to write about optimizing a Shiny app for multiple concurrent users. That’s a common issue and there are very interesting tools that help a lot when you know how to use them.

Hi Charles - I can’t seem to get the config file to save correctly it. I keep on seeing the directory index. Has this ever happened to you?

Hi Mandip. You must be careful when saving and exiting the file. In the article I’m showing the nano editor because that’s the easiest one, but that’s still way less user friendly than what we’re used to. Don’t hesitate to look at some nano guide on the internet if it helps!

Tried to go back and configure the server and now I’m getting prompted to enter a password, “[sudo] password for shiny”. Was not getting this prompt before.

That’s probably because you tried to execute a sudo command with the user “shiny”.

sudo means the administrator (or root), and the user “shiny” has no root access.

To get out of the “shiny” user, simply type exit and you will become root again to play around with the configuration.

Fantastic series of articles!! Really helped me get started

But alas, when I thought I was ready to go into production, I found out that Shiny Server Open Source only supports a single session :(

Luckily someone out there had the brilliant idea to develop Shiny, Proxy that takes advantage of Docker Containerization to enable unlimited sessions (among one of its advantages).

I recommend anyone getting more serious with Shiny to explore this alternative. And I would really be eager about reading an article about it ;)

If by a single session you mean it is single-threaded, then that is correct! Docker and Shinyproxy is one way to circumvent this issue. It’s more about scaling than deploying, so that’s the next level ;)

But yea I’d recommend checking out shinyproxy.io if one is interested in scaling the deployment of a Shiny app.